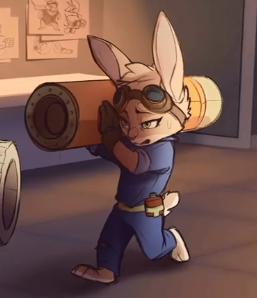 Ayala is a rabbit engineer who appeared in Elliana's trailer. She helped Elliana to build the mech suit, but could not fix the overheating problem before Elliana started to use it.

Ayala is also the mascot for Rivals of Aether's Steam Workshop.

There is a Ayala icon that can be used in online battles.

Ayala will be playable in the Definitive Edition of Rivals of Aether as an Alternate Skin of Elliana. She will be unlocked through the Milestone System by reaching 250 kills or 250 deaths as Elliana.

Retrieved from "https://rivals-of-aether.fandom.com/wiki/Ayala?oldid=8200"
Community content is available under CC-BY-SA unless otherwise noted.